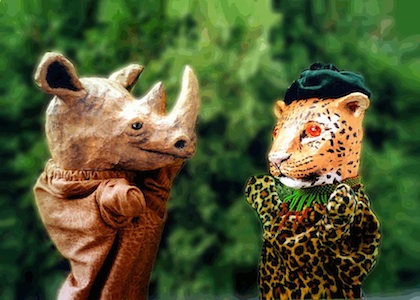 Mama Leopard gets what she wants by frightening smaller animals — until Rabbit turns the tables on her with the help of her son and the jungle’s two largest beasts, Elephant and Rhinoceros. Leopard learns that cooperating with friends works better than bullying. Maggie Whalen performs this story with stunning puppets she built of fabric and paper mache. “Leopard Learns a Lesson” is based on a Malawi folktale and features original music by Alison Plante. Come for the show, stay to make your own animal puppet and enjoy puppet-play. Best for ages 4 and up.

Maggie Whalen is the creator of Magpie Puppets, a one-woman puppet theater based in Stoneham, Massachusetts. She has been creating and performing puppet shows for children since 1969. In addition to performing, Maggie builds customized puppets for theater and film and has taught puppet-making workshops at schools, community centers, and at Club Med Mini-Clubs in the Caribbean. She is featured on the PBS Curious George show in the Sock Monkey Opera episode.